In November last year we did a slalom event at Bramley Camp and it was brilliant fun, so as soon as we heard that they did a Targa Rally at the same venue we wanted to go. The venue itself is an old Army base consisting of several forest tracks, some sealed surface road and about a dozen large concrete pads which used to have buildings on them. It is a brilliant place for a motorsport event with the forest tracks and the concrete being very slippery. Big horsepower isn’t necessary to have a good days fun. As with most Targa’s the format was fairly simple and designed to keep you moving most of the day. We arrived about 8.00am ‘flying the flag for BDCC’ as it were. Then we got scrutineered and noise tested and then signed in. Time for a cuppa and a wander of the paddock to look at the competiton. We were driving Adie’s MK2 Escort and there were two other MK2’s there to play. One was a car we knew from a previous event but the other was a red 1600 Sport which the owner had recently got back onto the road. It looked far too shiny for the Targa Rally but I guessed that would change by the end of the day. With a drivers briefing at 9.00am out of the way we were lined up ready to play at 9.30am.

Each test consisted of a drive along a section of the forest road to one of the concrete areas. Here you would drive through a series of cones, similar to a slalom, and then back out onto the forest road to the end. Sometimes there was a STOP/GO added in just to keep you on your toes and this was always on the forest section which made stopping the car interesting (I did overshoot one !). All of the route was timed so we were trying to get some traction with our standard road tyres.

As far as I was concerned the Escort was the perfect car for the day as there was a lot of sideways action on the slippery surface. We may not have been the fastest but we certainly had an awful lot of fun. It all finished far too quickly at around 5.00pm as it was getting dark. There were a couple of ‘offs’ during the day but most of them minor delays and nobody hurt. Although I did hear a tree was scuffed when somebody nudged it as it was in the way!

The event was organized by Farnborough and District Motor Club who we found to be a friendly bunch and very enthusiastic about their events. We will definitely be there next year, the only question will be how many cars we take. Also we did seem to take half the mud off the tracks home with us on the bottom of Adie’s car, but at least it looked like we’d been trying.

Bournemouth & District Car Club All Rights Reserved © 2017
Website made by Digital Storm LTD
This website uses cookies to improve your experience, assess web traffic, adhere to security protocols and comply with GDPR regulations. We would ask you to accept this standard policy for all secure websites but you can opt-out if you wish. AcceptReject Read More
Privacy & Cookies Policy
Necessary Always Enabled 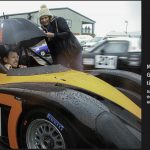 Motorsport is back with BDCC!News, Newsletter
Skip to toolbar